Through the Centuries (First Anti-Frerard Fanfiction Ever!)

I refuse to answer

I ignore the stinging voice in my head and hold on to the trunk of the tree as best I can.

--"Maybe he'll scream and you'll finally get locked up. You know you miss jail, Frankie.--

I finally reached the roof. The red roof that lead to the second floor window. I could see his fragile form from the outside. My Gee. I placed a hand on the glass. Then, carefully, I lifted the window. It made no sound and I was grateful for its silence. Not like Gerard could hear it anyways. The window slipped up and I hopped inside, making a slight sound. All that could be heard in the room was Gerard's ragged breathing.

A slight breeze came from the window. Slowly, hazel eyes opened. He saw me. I smiled softly.

I cringed at the voice. Gerard hadn't moved. I raised my hand in a friendly gesture. "Baby, I was so-” Then, he screamed. It was small and choked, but definitely a scream. "Gee." I whispered fiercely. "It's ME." I took hold of his arm. The scream rose louder. Why... why was he afraid of me?

I placed a hand over Gerard's mouth. This muffled the discomforting sound.

The accident.... The horrible car accident had left my Gerard deaf and nearly blind. Of course he would be afraid. I kissed his forehead slowly. He stopped struggling. Clear tears ran from the milky eyes and down his beautiful cheeks. The doctor said the signal to his brain had been damaged from when the car flipped over the eighth time. Gee squinted and grunted impatiently. I knew not being able to see was terrible for him. I pulled him to my chest. He froze at first, but then melted into my arms.

His words were sluggish. It had taken five months of constant therapy to get him talking again. I nodded into his hair.

I nodded again. Softly. The doctor said Gerard was still in shock. He wouldn't let himself believe he was actually deaf. His memories were horribly scrambled. I lifted his chin and pressed our lips together briefly. I should've been with him on that day. I should've been in that car-
I broke the kiss and sighed, pressing our foreheads together. His fingers rose to my lips. I kissed them. He frowned. "N-No...."

"I'm going to get you out of here, baby." I said softly. I wrapped Gerard in his blanket and picked him up. He was so light....

I pressed him against my chest. He was shaking like a leaf. He then smelled me and his muscles relaxed. He buried his face in my chest and felt the silky sweater with his fingers. His favorite sweater.

I shushed him and kissed his head. "Don't worry, baby. You're safe."The voice inside my head squealed. --"We're gonna have so much fun! Aren't we, Frankie?"-- I nodded to it. --"I can’t wait to see him writhing under us….”-- I giggled under my breath and pulled Gerard closer to the window. He had closed his eyes against my chest.

He truly believed I was Bert. That would turn out to be the biggest mistake of his life.

The doctor had said Gerard would be able to recognize people by their smell and feel (I listened in on a conversation), so I made sure to take all the precautions. I snuck in and took some of Bert’s shampoo. Then, after knocking him out and tying him up. I took some of his clean clothes and put on some of his shaving cream. I had used some of his hair gel so my hair would be just like his’.

Just as I reached the window, I saw a black car pull up to the Way house.

I scrambled back, away from the window, as Bert barged out of the car. He ran to the house. Now or never. I went through the window and pulled Gerard out with me. He groaned when I set him on his feet. Carefully, I guided him down the branch and pulled him down to the ground. There was a scream from inside the house.

“HE TOOK HIM! THAT MANIAC HAS GERARD!”

I hid us behind the oak tree just as more people left the house. Gerard whimpered at the cold air nipping at his body. I rubbed my hands up and down his beautiful torso. Then, when all was clear, I picked him up and made a run for it. My car was hidden inside a neighbor’s garage. I pulled him inside. As soon as I buckled him up, his eyes snapped open.

Then, he tried to escape me. I grabbed his chin and forced a kiss on his sweet lips. He was crying again. Taking off Bert’s sweater, I used it to tie his hands together. “We were supposed to die together, my love.” I said, stroking his baby face. “Or did you try to do that without me?”

--”Have some fun with him before you go. You know you’ve always wanted to.”--

Just as I turned the corner to main street, a siren went off. So I floored it. Gerard screamed. I flew past a red light. “Calm down, baby….” I murmured, stroking the highest spot on Gerard’s thigh. He begged for me to let him go. I laughed and slipped my hand into his boxers. He tried to push me away with his tied hands. Another red light. I flew past it.

Turning the car off, I got out of the car and went around for Gerard. He was sobbing pitifully and begging for me to let him go back home. He kept asking me what I had done to Bert. I took hold of his waist and picked him off the seat. Then, I pressed him against the brick wall of the alleyway.

“He doesn’t matter, okay baby?” I kissed Gerard’s neck. “It’s just you and me…. Say you love me, Gerard. Tell me.” I was trying to place his fingers on my lips, so he would understand me, but he refused to listen. He kept fighting me. “Gerard.” I said. It almost sounded like a plead. “Please. Stop fighting. Say you love me! Say it!” My hands were shaking.

He continued to struggle. I released his hand and held on to his hips instead.

I attacked his throat then, biting and sucking. Gerard let out a choked scream. His cold tears his my face.I grinded my knee against him and he begged me to stop. I grinded harder. Gerard’s sobs became hitched at the sudden friction. “Y-You’re h-hurting m-me….” He sobbed. Police sirens drew nearer. Come ON! I smashed our lips together. He turned his head, breaking our kiss abruptly.

I slapped him. Gerard squealed and began to cry harder.

“It’s because of HIM! You were mine and he took you from me! Isn’t that it?!” I took hold of his chin and forced him to face me. “You were MINE!” I spat, pinning his body down with mine.

I gritted my teeth and turned my head to the voice. Three police cars. Six policemen with guns pointed at me. Gerard had fainted.

I pulled Gerard away from the wall and put him between me and the policemen. “You won’t shoot.: I said softly. “Or I stab him.” I pulled the knife out of my pocket and put it up to Gerard’s tender neck.

A shot rang out. I felt my head being split into two. 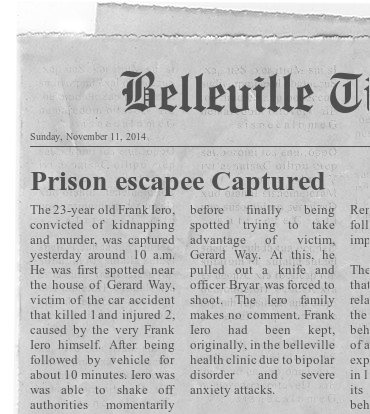 lol i was going to make the civil war before this... but this chapter randomly happened in two days XD

this is really good, sad, but good.

@Ayla
thank you! i havent been in here for a whiile. will post as often as i can

Idk why, but my mind still wants to hope things work out for some of them even tho I know it isn't going to happen. It's like some automatic response. I love these tho, even tho they break my heart.